Three P Dive Resort is a simple and welcoming dive boutique hotel, established since 2015 on the northwest coast of the smallest of the 3 islands on Romblon archipelago. The other 2 islands are Tablas and Sibuyan. Originally made of small bamboo bungalows, the resort has expanded and developed to be more friendly, more functional and closer to European standards.

It’s a family resort as we like it, owned for quite a while by the same family. Parents gave way to the 3 brothers, passionate Macro divers and underwater photo lovers : the 3 Ps, Patrick, Peter and Philip, who gave the resort its name. They are assisted by Kati, Philip’s wife, who is a great species specialist, a true bio-marine encyclopedia !

In a few years, the hotel has experienced a meteoric rise, thanks to the ability of the 3 brothers to help divers discover a totally unique and extremely rare Macro wildlife :

Crustaceans are not left behind, with the tiny Humpack shrimp, 5 species of hairy shrimps, the very rare Japanese dragon shrimp (Anachlorocurtis commensalis) or chocolate shrimp, but also Horn shrimp or the amazing Sashimi shrimp … 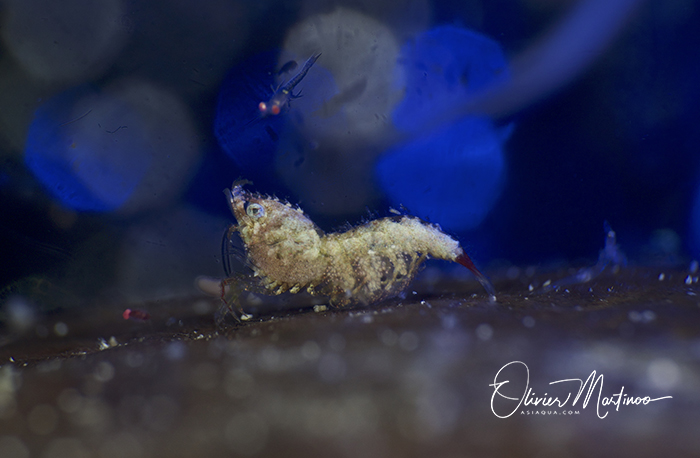 Mostly, this destination is made for Macro, super Macro and bio lovers, and high-level photographers who want to spot the rarest creatures in one only destination.

Peter, one of the three brothers, specializes in Black Water dives, which you must try if you are an experienced photographer. They are made at night, in the Romblon pass, above a seabed of +/- 200m. Come and take pictures of zooplankton and larvae, attracted by powerful lights.

This destination is to be combined with another nearby destination such as Anilao or Puerto Galera.

Your Dives & Photos in The Three P Resort…

Romblon is becoming one of the world’s dive Macro Mecca with Lembeh, Tulaben Ambon or Anilao, its neighbour. It is also a popular spot among underwater photographers from all over the world.

Three P also regularly accomodates marine biologists from far and wide, to observe and document species, including nudibranches that sometimes even don’t have a name yet.

As in Anilao, guides are here to “spot” and not to manage a team or even guide. You are supposed to be an experienced  diver and photographer who does not need anyone to manage your air consumption or your safety, which is mainly the role of your buddy.

The 3 brothers are now less in the water, but they have trained a team of local young spotters who all know all the species of critters that we want to find in these waters.

The boats used are traditional Bancas. There is of course a first aid kit and a large oxygen bottle available at the club. You will have to present : your certifications and dive books.

The Resort has 12 rooms, 3 seafront bamboo cottages, 2 Deluxe rooms also facing the sea, and 6 large Superior rooms in the main building, on the first floor behind the restaurant where are served the 3 daily meals.

The atmosphere is very international, photographer divers come from all over the world to dive and shoot the rare creatures of the area. 3 boats leave every day to the various dive sites in the area : Lunas, Agnay or Lonos Sanctuary, the Rope, Bangis Island, Sweet Sea Grass Valley or Bonbon Beach … 35 dive sites with very different biotopes, few fish to observe, a few corals, but a macro abundance that will surprise the most jaded divers !

You can only book at the resort when combined with another trip, for instance a week in Romblon and a week in Anilao, order and length of stay depending on the ferries that connect Batangas to Romblon in a night trip.

Stays in Romblon are only offered in combination with stays in Anilao:

We offer turnkey packages including:

Three P has 10 rooms in 2 categories, all newly refurbished. Spacious, they are designed for photographers, with large working tables and many electrical outlets, with connectors of all sizes. They all have air con and a private bathroom with hot water : Double or Twin beds.

We will make sure to book the best available room possible for you, as we perfectly know this place.

We offer this all-inclusive combined trip : return transfers between Manilla airport and the resorts, ferry tickets, full board accomodation, dives in both resorts. You only have to let go and dive.

For 13 days 11 nights, you will discover the true marvels of Macro biodiversity in Philippines.

You can book this trip a la carte, ask us for a personalised offer, according to your wish, season and your budget