Raja Ampat (“The Four Kings”) archipelago is part of the north-west coast of New Guinea, also called West Papua. It comprises over 1500 islands, mostly mountainous, and covers a land of about 46 000 km2.

Raja Ampat is located at the western boundary of Pacific Ocean. Indian and Pacific oceans waters meet there, which means strong currents and powerful tides. Accordingly, large amounts of plankton are to be found, waters are often dark and troubled.

In November 2010, the archipelago was classified as a sanctuary by Indonesian government, which created an local administration entitling local populations to be more involved in managing their natural resources, which their subsistence lies in.

Inside this protected area, they have banned fishing aquarium species, sharks, manta rays, mobulas, dugong and turtles, as well as dynamite fishing, which is especially devastating for coral reefs.

The growing number of NGOs involved in environmental issues and educating local populations, added to foreign divers’ interest for the region, will surely help raising awareness . Underwater eco-tourism is a significant weapon to fight against excessive shark fishing. The main idea is that an alive shark is more useful to local economy than a dead shark !

With still very few inhabitants and visitors, the park will make you feel like first explorers.

Of course, the seabed is incredibly rich, from micro to numerous pelagic : manta rays, mobulas, your first wobbegong shark, a tiny pygmee seahorses, many sites full of « fish soup ». Diving in those waters will undeniably be among your best memories.

Liveaboards offers are more numerous every year, which means rates have been literally reduced by half. Raja Ampat is a perfect destination for experimented and demanding divers.

Already, we can offer multiple-days liveaboards, on different categories of boats. By the end of summer, we will also have our own selection of resorts. You can combine this trip with another one on islands such as Bunaken, Bangka, Lembeh, Ambon, Bali… 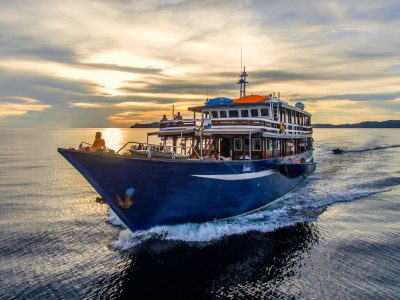 Ambai is a 32m long ironwood vessel, powered by a 600 HP engine. First launched in July 2012, this comfortable and stable boat has been especially made for live aboard. Ambai has 8 cabins, two of which opening onto the upper deck, all have private bathrooms (with toilets and hot water showers). This spacious boat […] 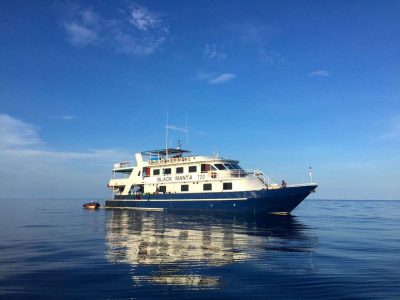 The Black Manta is a 32 X 7 meters steel yacht, with two huge 500 CV motors. Built by divers for divers, it’s a spacious boat, comfortable and stable on sea. Operational since 2006, Black Manta is ranged between the 5 stars liveaboard. This ship offers round trips from May to October in Komodo, Raja […] 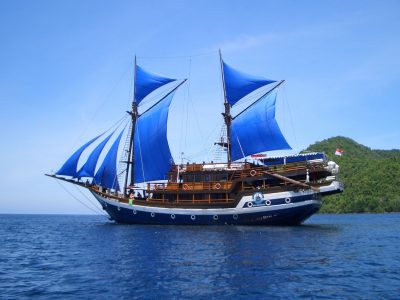 Cheng Ho is an ironwood schooner (sailboat), 33m long and 10m wide. It is a traditional Phinisi from the land of Bugis, south of Sulawasi. This gorgeous boat combines the comfort of modern ships with the charm of old vessels. She is equipped with a 347HP engine and 3 auxiliary engines, and 110 and 220 […] 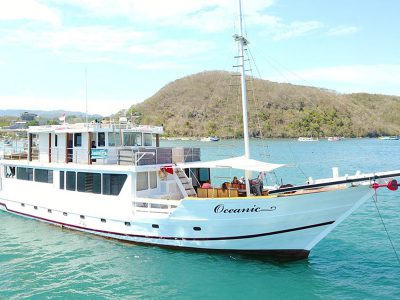 2,062.19$
Komodo cruise January to March and from May to September. Banda Sea Cruise in April, October and November. Komodo are 7 Days 6 Nights, Forgotten Islands 11 Days 10 Nights.

MY Oceanic is a traditional Indonesian Phinisi, 28m long by 6m wide, offering year-round liveaboards in Indonesia  Komodo National Park, Flores and Alor straits and Forgotten Island, the new booming destination in Indonesia. Completely renovated in 2016, the MY Oceanic is equipped with a 260CV Doosan engine, 3 generators that supply power in 110 and […] 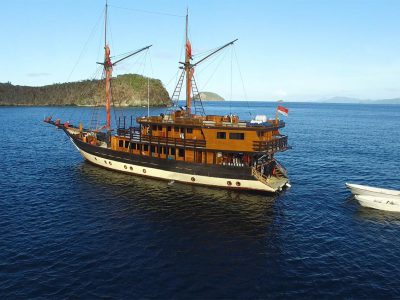 The Galigo is a traditional Indonesian Phinisi, 33m long by 7.85 wide, built in 2012. This beautiful 2-mast sailboat sails year-round between Komodo Park, Raja Ampat marine sanctuary and Wakatobi, the booming destination, south of Sulawesi. The boat is equipped with a 350CV Mitsubishi engine, 2 generators provide power in 110 and 220 Volts. Its […]

M/V Pearl Of Papua is a large traditional Indonesian Phinsi, 30m long and 7.5m wide, built in 2010 in Tanah Beru. It offers cruises all year round in Papua : Raja Ampat, Triton and Cenderawasih Bay; basically all of Papua, the center of biodiversity in the Coral Triangle. Le KLM Pearl Of Papua is equipped […] 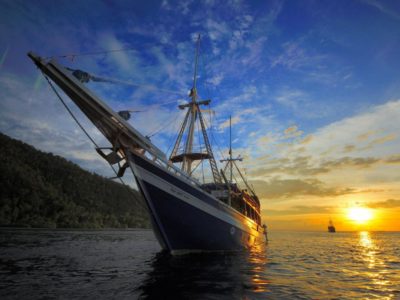 M/V Pearl Of Papua is a large traditional Indonesian Phinsi, 30m long and 7.5m wide, built in 2010 in Tanah Beru. It offers cruises all year round in Papua : Raja Ampat, Triton and Cenderawasih Bay; basically all of Papua, the center of biodiversity in the Coral Triangle. Le KLM Pearl Of Papua is equipped […]